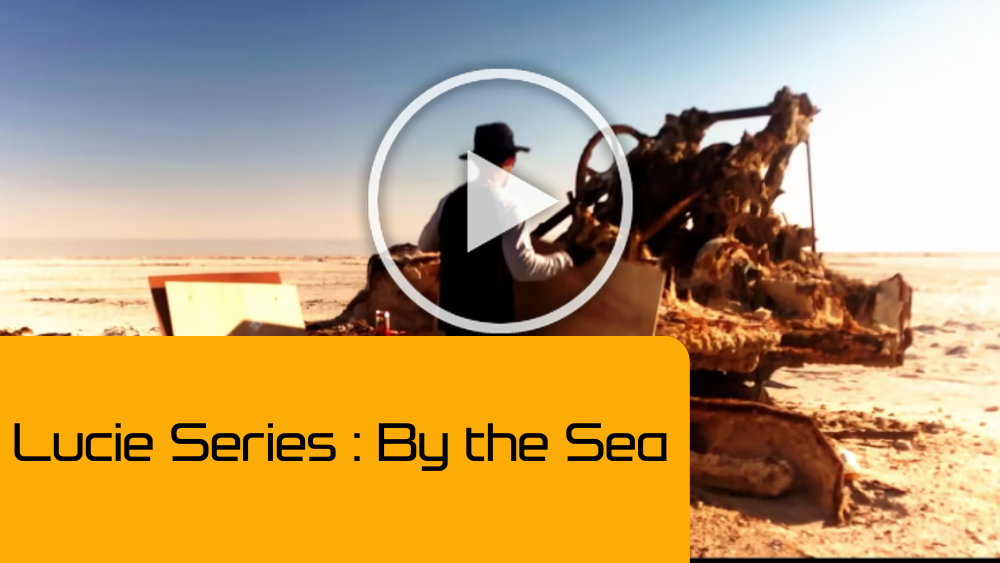 Lucie Series: By the Sea

At first glance, Bombay Beach seems bleak, and practically deserted, except for a few locals. But intertwined among the empty lots and abandoned buildings, creativity flourishes and thrives. Nestled in Southern California, on the banks of the state’s largest lake, Bombay Beach serves as an oasis for artists.

At first glance, Bombay Beach seems bleak, practically deserted, except for a few locals. But intertwined among the empty lots and abandoned buildings, creativity flourishes and thrives. Nestled in Southern California, on the banks of the state’s largest lake, Bombay Beach serves as an oasis for artists.

From a swing set anchored in the retreating waters of the Salton Sea to a towering 50-foot-high sculpture made from a World War II military jet and hand-blown glass flowers, this once booming resort destination is now home to massive, permanent art installations—oftentimes standing in stark, colorful contrast to the dusty, bare surrounding landscape.

Lucie followed L.G. Givot, a graffiti artist and painter, through his creative process as he brought his own talents to the shores of the sea. With three blank canvases, not propped picturesquely on an easel inside a studio but perched somewhat haphazardly on a rusty, dilapidated piece of machinery, we watched as Givot used the curves, flow, and colors of the natural environment as inspiration for his work.

Givot is one of many artists who find inspiration here. Every year artists, philosophers, creators, and makers flock to Bombay Beach to celebrate their creativity and expression together. Much of the striking art fixtures by the sea are thanks to the Bombay Beach Biennale. What started as a single-weekend event back in 2016 has now grown to what the Biennale calls an “art movement.” It lasts from January to March with performances, painting, sculpting, and artists sharing their work with community visitors.

Such a gathering isn’t new to Bombay Beach. Back in 1905, the Colorado River flooded the low-lying basin, creating the landlocked Salton Sea. Then, starting the 1950s, it became a hot-spot for tourists—with luxury resorts and vacation homes springing up along its shores. Thousands of people—even celebrities like Frank Sinatra and the Beach Boys—sought refuge here away from the stresses of every-day life. But that all changed. High salinity levels, contaminated runoff, and shrinking waters have led to what the Salton Sea and surrounding communities, like Bombay Beach, are today.

There is a push to save the Salton Sea, and in turn, the communities that desperately desire a renaissance. But, for now, the artists enclave in Bombay Beach is working to fill the sea’s shores, not just with water, but with art.

By the Sea is part of our Lucie Series, where we shine a light on all of the good and interesting stories in our community. We are giving away one positive story every month, and we are accepting nominations. If you know of a great story that deserves to be heard, fill out the form here: https://luciecontent.com/contact